An autosomal DNA test of kit 317601 is now pending. Of the living descendants I have located of our earliest known Wright ancestor, Gabriel Wright, this tester is the least number of generations removed (five). With autosomal testing, the amount of shared DNA between two testers is reduced by 50% for each successive generation that the testers are removed from the common ancestor. At a relationship range of third cousins or closer, autosomal testing has about a 90% success rate in correctly detecting a match. However, because of the 50% reduction that takes place from generation to generation, the success rate in correctly detecting a match drops to less than half once the relationship range of third cousins is exceeded, and less than 25% once the relationship range of fourth cousins is exceeded. Therefore, each generation closer you can get to a common shared ancestor significantly increases your chances of discovering matches.

Our shared ancestry to Gabriel has already been established via the Y-DNA tests that my uncle and kit 317601 have taken. With kit 317601 being two generations closer to Gabriel than my uncle, I’m very hopeful his autosomal test may prove to be key in locating matches that help to determine the correct ancestral family of Gabriel. In further helping with determining Gabriel’s ancestral family, the father of kit 293820 has also taken an autosomal test. Triangulation of potential matches between kit 317601 and kit 293820’s father, should prove very fruitful in determining potential Wright families to research further for a connection to Gabriel. As has been shown previously by the Y-DNA testing, it’s likely that Gabriel’s ancestral family has ties to the Wright family of colonial Flushing, Long Island, New York and to George Wright, who signed the Flushing Remonstrance.

With autosomal testing, the more comparisons that can be made, the better, so if there are Gabriel Wright descendants reading this who have taken an autosomal DNA test (Ancestry DNA, Family Tree DNA Family Finder, or 23andMe), or are interested in taking an autosomal DNA test, please contact me.

A descendant of George Wade (Senior) of Monongalia County, Virginia (now West Virginia), contacted me back in April, after coming across my website while researching his family line. After he clarified his lineage, I realized he was a direct paternal line descendant of George, and asked him about DNA testing. He has been kind enough to agree to help me with testing, and his Y-DNA test is now pending.

Thanks to tips from two people who saw my call for a tester from the Stone family of early 1800s Pendleton County, Virginia (now West Virginia), I have now located someone who has agreed to proceed with testing. This particular Stone line is one I’ve considered to be a possible ancestral family for my own Stone line for several months now. There are several bits and pieces of circumstantial evidence that look to perhaps link the two family lines, but I have yet to come across any documentation which shows a conclusive connection. It will be nice to be able to, at long last, hopefully make a firm conclusion as to whether or not there is a close relationship between the two paternal lines using DNA evidence. Results of this pending test are expected to be back by the middle of September.

Besides the Pendleton County family, I have also had similar interest in the Stone family of early 1800s Greene County, Pennsylvania, due to the close proximity to Monongalia County, Virginia (now West Virginia), and there having been at least one intermarriage between the two family lines. There is a contact I’m working with right now in regards to her nephew possibly being willing to test. Should he decide to proceed, I’ll post that a test candidate has been found. In the meantime, if anyone else knows of a direct paternal line descendant of the Stone family of early 1800s Greene County, Pennsylvania, who has taken a Y-DNA test, or may be interested in taking a Y-DNA test, please contact me.

The DNA test of the Oyster Bay Wright family descendant is in the process of being upgraded to 67 markers. This will help to positively identify which group in the Wright DNA Project is the Oyster Bay group. While it looks very likely that the pink group at the top of the page of Haplogroup R1b1 and Subclades results, starting with kit number 235938, is the correct group, the upgrade to 67 markers is necessary to be certain of this. If the pink group is indeed the Oyster Bay group, these results may help to solve the mystery of the ancestry of at least one Wright family of Virginia, and may clarify the migration of some of the Oyster Bay descendants after they left New York. Results of the test upgrade are due by the middle of August.

Up until now, my branch of the family of Theodore and Julia Ann (Wade) Stone has only had this one photo of them with their eight children who survived to adulthood: 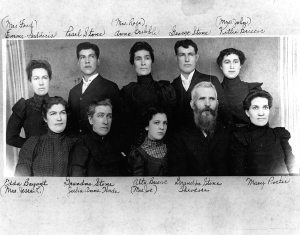 This photo has been a cherished heirloom in our family, and is believed to have been found among the photo albums of my grandfather’s sister, Juanita, who passed away in 1982. From what I recall, the original photo was damaged, so a local photo studio took a photo of the print, did restoration work on the copy negative, and then made new prints which were given to family members. It was extremely helpful to have the individuals labeled on the mat board which housed the print, as we might not have correctly known who was who among the girls, and it was a great help to know their married names and the first names of the husbands of all of the girls except Mary. My grandfather, Larry, had a very striking resemblance to how his father, Arthur (Pearl), appears in this photo. I believe the original photo to have been taken about 1900, based on the apparent ago of Alta, who was born February 18, 1887. For all of the people other than Pearl, this family photo was the only photo we had of them.

Several years ago, Diane, a descendant of Mary, made contact with me, and we began exchanging information. It turned out Diane’s family had several old photos that have turned out to be of the Stone family, although several of them were not known to be members of the Stone family as the photos were not labeled. Among the photos was one which looks to have been taken at the same time as the family photo above, considering that Alta is wearing the exact same dress and hairstyle: 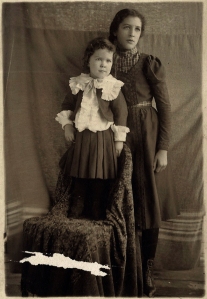 The white area in the lower left is some damage that has occurred to the print. I made the mistake initially of thinking that it was a little girl in the photo with Alta, but have since learned that it was fairly common for young boys to be dressed in such outfits. Diane confirmed with her mother that it is Mary’s son, Charles Porter, in the photo with his cousin, Alta. He was born October 2, 1896, which provides an additional estimate of the group photo having been taken about 1900.

This afternoon, I received another photo from Diane, and it is an absolute gem. It is another Theodore and Julia Ann (Wade) Stone family photo, taken a few years after the previous photo: 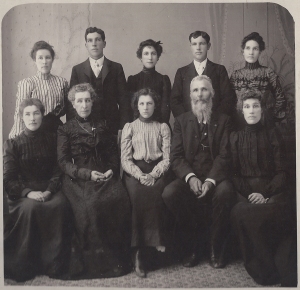 Almost everyone is in the same place as the previous photo, with the exception of three of the daughters. My guess as to why they are positioned differently is to balance the black dresses with the lighter, patterned dresses among the daughters (two black dresses and one patterned dress in the front row, and two patterned dresses and one black dress in the back row). Among the three who are in different positions, I believe Anna is in the front row at far right, Kitty/Kittie is in the middle of the back row, and Mary is in the back row at far right. Dating this photo is a bit more of a challenge, although it is known to be before October 29, 1914, as that’s when Theodore passed away.

It’s very exciting to come across this photo, and I can’t thank Diane enough for sending it to me. It’s a wonderful example of the power of collaborative genealogy. She has also sent me additional photos of some of the Stone daughters later in life, and I plan to make these photos part of my upcoming posts.

Back in March of 2012, I was contacted via the Ancestry.com messaging system by someone who saw my Ancestry Member Tree and noticed that our second great grandfathers were brothers. Since that time, this fourth cousin and I have exchanged many emails and lots of Stone family information. Most importantly, she was able to make me aware of research that her great grand aunt did when she applied to the Daughters of the American Revolution in 1942. Unfortunately, despite our solid paper trails, this fourth cousin and I were not able to verify our relationship with DNA testing since we did not come up as matches to each other’s test, as can be the nature of autosomal DNA testing. As it turns out, though, her great grand aunt’s research provided the foundation for new research this fourth cousin and I have done which has lead to many new discoveries regarding the Stone line.

One item of much interest in the DAR application was the listing of the names of two spouses of children of Henry Stone. Using this information, it became possible to find census records and other documentation which lead to locating someone about a year ago who was likely a mutual fifth cousin to me and my fourth cousin. I say likely, because while there were many pieces of circumstantial evidence to support the connection, there was nothing which confirmed the maiden name of this fifth cousin’s third great grandmother. We concluded the connection was quite probable, but vowed to keep researching to see if additional information could be found to better substantiate our relationship.

About a month ago, Ancestry added a new record collection of Pennsylvania Death Certificates. Within this new record collection were two death certificates for sons of this fifth cousin’s third great grandmother, and the maiden name of their mother in both cases was Sarah Stone. Finally, we had the paper trail link we had been searching for.

As part of her ongoing genealogy research, this fifth cousin recently took the Ancestry DNA autosomal test. Just yesterday, she sent me a couple emails letting me know she had received her results back, and later, that she had found my test result among her matches. At long last, I now have the first match (outside my immediate family) that I can say is most likely a mutual descendant of my fourth great grandparents, Henry Stone and Margaret Murphy. I still need at least one more match, however, so that the proper triangulation of the matching chromosomes and segments can be done in order to confirm we are matching on the same ancestors.

All in all, this is a very exciting discovery and first step!