The previous article in this series is Using Genome Mate (Identify triangulated groups and confirm segments).

As highlighted by the red rectangle in the screenshot below, on the middle lefthand side of the details screen is a place where you can record the ICW Group of this matching segment. Although you can enter anything you like to identify your segments, you can make the greatest use of the Genome Mate tools by following the conventions suggested by the program.

As noted in my last post on identifying triangulated groups, a segment will match you on either the paternal side of your family, or the maternal side of your family, unless your parents are closely related (which you can determine by running a GEDmatch one to one comparison between them). Once you’ve identified the ancestor(s) who passed the triangulated segment down to you, the first thing you should do in the details screen is select the radio button for the corresponding side of your family line (paternal or maternal) for the ancestor(s) this segment is inherited from. [Note: If your parents are closely related, for now it is best to leave the ICW Group for the segment as the default question mark (?) and not confirm the segment, until further comparisons can be done to narrow down the source of this specific segment, as will be covered in a future post.]

Once I’m done with my selection of Paternal or Maternal (and Grand Father or Grand Mother, if known), I go to the upper righthand corner as highlighted by the red rectangle. Here I can select via dropdown boxes the paternal most recent common ancestor (MRCA), and/or the maternal most recent common ancestor (MRCA), that I share with the test taker whose segment I’m confirming. In this example, I use the two dropdown boxes to select my Paternal MRCA of John Isaac Egbert and my Maternal MRCA of Eliza Jane Seaver.

Before proceeding, it’s a good idea to get in the habit of checking to make sure the ICW Group and MRCAs are as you intended. If they are not, go back and redo your selections. After making sure everything is correct, click the Save button at the lower right to confirm the selections we have made for the segment.

Clicking the Save button will take you back to the Genome Mate main window. You will see the segment is now colored, indicating the MRCA has been selected. The color is a function of how many generations back the MRCA is in your ancestral line. Looking at the chromosome map at the top of the screen, you will see that this segment has now been added on the lower bar (maternal side). The first letter of the ICW Group we selected on the details screen (P or M) determines which side the confirmed segment is added to. Since I selected MGF for this segment (to indicate my Maternal Grandfather, as it is this ancestral line the segment was passed down to me from), the confirmed segment is added to the maternal side of my chromosome map. Had the MRCA been from my paternal ancestral line, and I selected P for the ICW Group, the confirmed segment would have instead been added to the upper bar (paternal side) of my chromosome map. 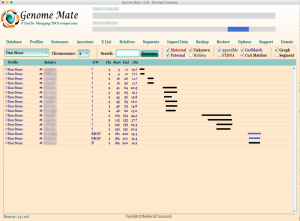 If I click on the Segments menu option (one of the selections on the line immediately below the chromosome map), I can see my entire chromosome map for all of my chromosomes and confirmed segments. As with the mini chromosome map that appears in the main Genome Mate screen, the segment we’ve confirmed appears on the lower bar (maternal side) of chromosome 2 in my full chromosome map. I can now go back and repeat the process to confirm the other segment I’ve identified the MRCA(s) for in this triangulation group. 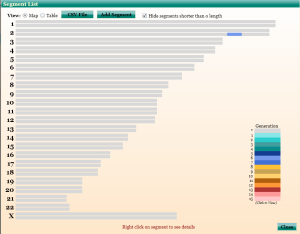 Congratulations, we have successfully worked through identifying a triangulated group and confirming a segment. This process gets repeated over and over as we work through all of our segments, attempting to identify the MRCA(s) for each one. As you continue to work through all your segments and triangulated groups using this process, and confirm which ancestor(s) the segments are inherited from, they will be added to your chromosome map, filling more and more of it in. Where they overlap, the confirmed segments of older generations will cover up the confirmed segments of younger generations. This allows you to pinpoint, with increasing precision, from which ancestor(s) a specific segment of DNA was inherited from.

In the next post, I will begin to demonstrate and explain some of the built-in tools Genome Mate has to make it easier to identify triangulated groups and confirm segments, and track your correspondence with matches. As with all my posts, if you experience any problems while following these steps, notice that a screen has changed dramatically from what I’ve shown in the screenshots, or have an easier/better way to do the steps shown, please let me know by commenting on this thread or sending me an email. Thank you.

The next article in this series is Using GEDmatch (The Triangulation Tool).